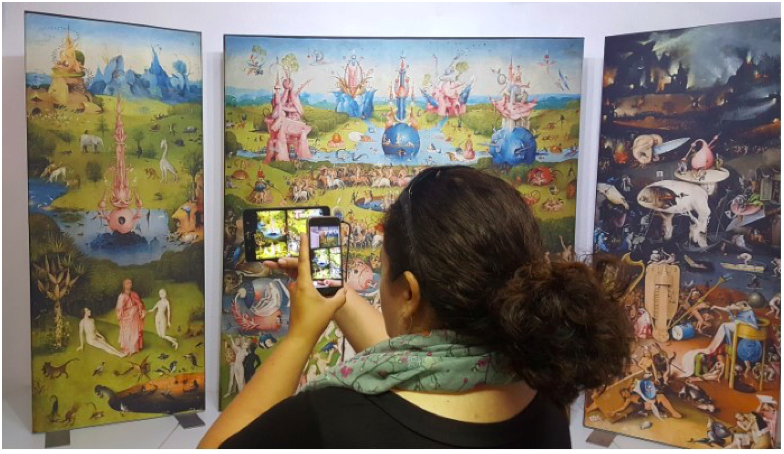 Art@Africa’s director Dirk Durnez has created memorable art experiences for over thirty years and been at the forefront of applying new technology in international museums and edutainment centres. Durnez states that “it’s about telling meaningful stories and creating the relevant environment to immerse people into”. He “bases ‘his’ designs on the synergetic concept of three spaces; the ‘cognitive space’ (the content), the ‘social space’ (where the person and his/her experience is central) and the ‘dream space’ (the area of the symbolic, where fantasies and memories from the past and the culture trigger associations”. Dirk’s concepts are based on the principles; ‘hands-on’ (interactivity), ‘hearts-on’ (touching the soul) and ‘minds on’ (shifting perceptions and mind-sets).

Durnez’s meeting and interaction with both artists has been an autonomous journey itself. Durnez loved ‘how Griessel’s work took him on a journey in his universe of melancholia, displacement and the traveling nomad going somewhere’. His drawings may appear to be a whimsical fantasy scene but in actuality the themes attempting to be visualized are often serious and extremely personal. There is a certain truth, discomfort and humour when experiencing Griessel’s art.

“My art walks the tightrope between playfulness and solemnity, whimsy and pensiveness. Occasionally I use picture book illustration as an idiom to express my ideas. Illustration in itself is not seen by many as forming part of the ‘Fine Arts’ family, but more as a bastard child spawned in a scandalous union between word and image.  My pictures are my own restless bastard children: They are not completely at home in fine art galleries but also not comfortable to be safely encased between the covers of a book, like their creator they feel safest in the periphery, the threshold and the boundary.”

Themes like; the travelling nomad, displacement, alienation, destruction and melancholia are examples of that which is current in Griessel’s mind.  Interspersed among these works are whimsical and often quite arbitrary references to literature “that include, Franz Kafka, Nietzsche, Samuel Taylor Coleridge and T.S Elliot”. Griessel finds inspiration from literature as he does from art history. Griessel’s art method making is an act of building a parallel universe, one drawing at a time.

Dirk met Henning Ludeke two years ago at ‘Woordfees’ where Dirk immediately realized that one day they would work together. In response to whether digital and augmented reality is real art, Ludeke answers that “artists are known as rule breakers who deeply explore the senses and how we perceive the world through them. Technology influences our everyday life and the way we make and experience art”. Dirk adds that “the immersive interactive augmented experience adds a social context contrary to Oculus and VR experiences”. This new art form’s interactivity allows the canvas to come to life as one steps into the artwork and become part of the story.

The augmented visual reality of Lord Candle Head’s Throne of Delirium has a touch of magic and leaves a memorable impression. There are no boundaries as the screen becomes fully three dimensional as you walk hand in hand with the creatures that meander in an almost weightless and endless world. This work helps you to break out, to dream and escape in a new world where we somehow relate to and a world that we somehow want to belong to. It touches your soul, it resonates with you, it moves you

Arbor Oneirica is a joint solo exhibition with David Griessel and Talita Steyn at Art@Africa on the 6th November. Written by Nadine Froneman MFA